Turning back the clock on the American Midwest, Peter Bogdanovich puts real-life father-daughter duo Ryan and Tatum O’Neal on a Depression era road trip. Shot by key ‘New Hollywood’ cinematographer László Kovács on black and white film stock (now gloriously converted into high definition), Paper Moon glances nostalgically at the past, delivering a tale of two outlaws with a quant, hazy idealism as the pair hustle their way across America; flogging bibles, conning cashiers and bootlegging whiskey. Consequences soon follow but are always fleeting and only work to strengthen their emotional bonding. 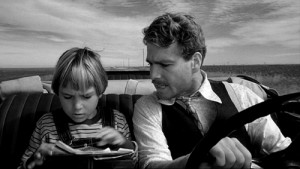 Moses accumulates Addie in the same way a drifter gets a leaf stuck to their boot. Unfortunately for him, as much as he tries to shake her off, she soon becomes so worn into his heel that she’s a part of the sole before he knows it and it’s in their affectionate acceptance of one other that the two end up sticking to the road.

Although Addie shifts from silence to sassiness, her heavy eye daggers are persistent and keep Moses on his toes as they venture out on their journey. She is the brains of the outfit. While Moses is smitten with vapid dancer Trixie, Addie smokes in her bed and conjures up plans far above the mental capacity of most 9 year olds. Wise beyond her years, refusing to even be restricted by gender stereotypes, Addie is the real brains of the outfit and she has a lot more going for her than the host of uninspired Midwestern stereotypes that she and Moses stumble across along their way.

Paper Moon is a film made to feel a lot older than it is but it also has a youthful, self-aware quality at its heart. The meshing of a neorealist sensibility with a watered down Bonnie and Clyde narrative makes it both simplistic and easily likeable. Tatum O’Neal won everyone’s hearts, including the Academy, back in ’73 and she still manages to pull it off now with her cynicism and Robin Hood-esque approach to hustling. The film is unassuming with a meandering yet traceable narrative arc but its strengths are in its two protagonists. Enjoyment can be mapped on how endearing you find the twosome to be. For me, they were perhaps a little too sweet for my liking at times but their story is a surprisingly engaging one and has the potential to charm even the most hardened of viewers.