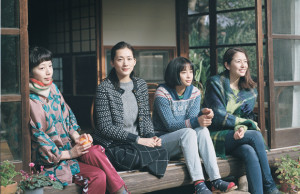 Three sisters Sachi, Yoshino and Chika live in an ancient, massive house in Kamakura. They have lived here for years after their parents divorced and then their mother passed away suddenly. Now they are to attend the funeral of their father in the countryside and meet with his new wife and their half sister Suzu from another relationship he had. Her mother has also passed away and the three woman grow attached to the orphaned teenaged Suzu. They all decide to invite her to stay with them in Kamakura and being a new life with sisters and family. Suzu jumps at the chance to be a part of hope again. 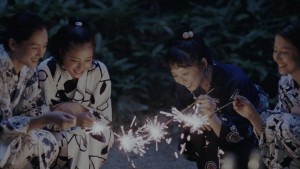 Kore-eda Hirokazu nods in his films often to Ozu. He did so in STILL WALKING and AFTER LIFE. Here he spends much of the film meditating on the space that the sisters inhabit and the family dynamic that is reshaping. Makes sense that he would as that is the centre of the story and the central point of the work but I have an issue. The film pulls to close to the TV drama side in my opinion. Where Ozu knew the line of emotive control, Hirokazu occasionally trips over it. He falls into saccharine and the taste is sour to the imput elsewhere. 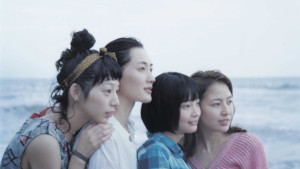 This is not to say that the film is not beautiful looking, with its lenses wide and Japan stunning. The transfer helps this along and some scenes are eye wateringly stunning as was STILL WALKING. It is also not to say that the performers arent good. The family is believable and you enjoy their space and time. The problem is that the jarring niceness and sweetness add unbalancing tastes like say fish and strawberry or steak and mango. Watch the two earlier films and see what I mean. Hirokazu has a taste before this and that has changed.