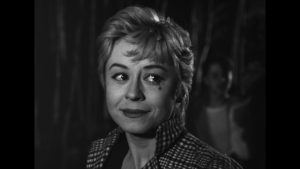 God is indifferent. I mean he could well not exist or he could be bipolar. For Fellini however, god was kitsch. He was pageant and pictures of inanimate objects. He was a voice in the dark that whispered and so soft that no one heard.  Cabiria (Giulietta Masina, Fellini’s wife) has to contend with the siring doubt. This is not in god but in the indifference of the world that has seen her shun the poor, who help her and embrace the rich. You see she is a prostitute. 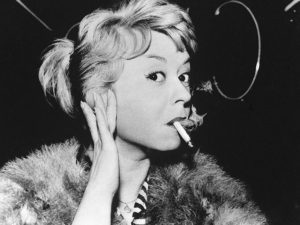 An eternally optimistic Rome streetwalker, who hopes to be more than she is. Life has other thoughts. Cabiria will not be let down though. With warmth and optimism, she steps up to the world and even when knocked down, cant help but smile. Fellini captures the world as it is. Some would suggest that it was under pinned with indifference and anger. However I would always suggest looking deeper. Phil Kemp does in his interview. Though there is far more in depth Fellini and expansive works, Kemp gives the casual viewer a fix. 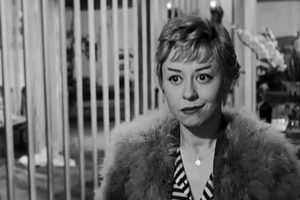 The shine and texture of life is rubbed and the veneer lost in Fellini but some how the reward is there to find. I think the darker edge to this work (realism so to speak) is Pier Paolo Pasolini addition. He worked on the film and his touch is noticeable. You may never see it yourself, I didn’t for a long time but its there. Which brings me to the restoration. It sharpens up the image. Removes lint and fuzz but I am still less sold on older works getting over worked on these restorations. If I were honest, I think its not going to be bettered on print.