Made in America DVD Review 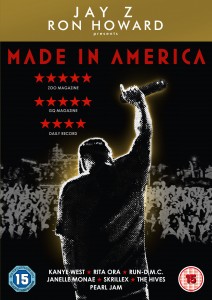 When I had first heard that Ron Howard was to be making a documentary following the Philadelphia music festival, Made in America, organised and headlined by HOVA himself, Mr Jay Z, my initial reaction was one of surprise, followed by extreme excitement. I’ve always been a big fan of both of theirs. Jay Z was the first rapper I took to after Eminem, which lead to me branching out and discovering some of my favourite music, and Ron Howard is a wonderfully talented film maker and the smooth voiced narrator of my all time favourite show, Arrested Development.

I went in to the film expecting a similar affair to Fade to Black, Jay Z’s concert documentary following the conception of The Black Album and his retirement show at Madison Square Garden (Of course, as we now know he didn’t stay retired for very long). Made in America though is a concert documentary like no other. Not only does Howard spend his time getting to know all the artists, handpicked by Jay Z, artists you would never expect to be on the same stage, let alone that Jay Z would choose them for his dream festival. The documentary also speaks to all the people who make the festival work, and those it affects who we might not consider when dancing along to Janelle Monae. This include a food vendor taking a huge risk and hoping it pays off, a roadie who works all weekend, day and night, and loves every part of it, and an incredibly endearing elderly woman who can’t stand all this “bang bang” music, but is partial to a bit of Jill Ross.

“I believe that every human being has genius-level talent, you just have to find what it is you’re good at and tap into it”, this seems to be part of Jay Z’s reason for setting up this festival. To showcase the myriad of talent that exists in the music world today, and the diverse nature of the modern music lover, perhaps most importantly the festival hopes to show the possibility of success for those willing to work hard for it.

Howard’s film achieves what other concert documentaries do not though through his enlightening interviews with the films other artists. For it is here where Made in America is truly special, it offers artists who have not yet reached Jay Z level of success, a concert documentary of their own. A space where they can talk about what it means for them to make music, or where they grew up, or who they look up to. The fact that Howard seems to divide the film up equally to allow equal time for all artists, means at no point does the film seem to be repeating itself. Concert documentaries to me, often feel like they are repeating themselves, and the live performances themselves tend to run long. In Howards film though, he seems to recognise the true beauty of the festival, and of the world of music in general today, is its diversity, and as a result he hops around the line-up brilliantly. Never spending too long on the performances, giving us perfect snippets that sum up the power of the artists and their relationships with the crowd, whilst cutting to our less famous subjects keeping the festival moving.

The interviews with artists like Rita Ora, Janelle Monae, Odd Future, the surviving members of Run DMC and even Skrillex, are fascinating and often leave you begging for more, but I have to trust Ron Howard, and assume that the interviews are cut at the perfect point, rather then dragging them out to the point of repetition, each interview offers something new and interesting. Whether it be Janelle Monae explaining her black and white clothing choice, DMC talking about the conception of Walk This Way or Rita Ora’s surprising potty mouth, it shows you that today’s musical talent are bright, engaging and love what they are doing.

The film ends as the concert ends, with the spotlight firmly on Jay Z, and he deserves it. Jay Z comes across as a genuinely lovely guy, and one of the final scenes where he visits his old apartment still leaves a smile across my face. Jay Z put this concert on for the musicians he loves, and the fans who put him where he is today, and the documentary was made so even more of those fans can see it, and for that I for one am certainly grateful. This is a concert documentary that redefines the concert documentary, don’t miss it.

MADE IN AMERICA is available on VoD and DVD now