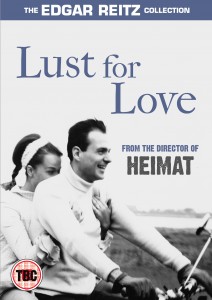 German director Edgar Reitz is most famous to film viewers for Heimat (1984-onwards), the epic, ongoing historical appraisal of his homeland the Hunsrück. It seems as overdue as it is welcome, then, that Bluebell Films launches next week its new “Edgar Reitz Collection” with two of the 79-year-old’s earlier works, released on DVD for the first time in the UK.

When Lust for Love (Mahlzeiten – literally “mealtimes”) premiered at the 1967 Venice Film Festival, it won the Best First Film award; Reitz’s debut feature is a pithy and serious work that charts one couple’s pursuit of happiness in contemporary Germany. Channelling Breathless (1960) and other stylistic traditions of the nouvelle vague, the film has both a romantic and a melancholic sweep, formally playful and marked by a kind of offbeat-cum-downbeat attitude toward its subject matter. As such, it’s an effective study of one romance’s trials and tribulations.

Elizabeth (Heidi Stroh), a 20-year-old photography student, meets Rolf (Georg Hauke), a medical student, while taking pictures at a dock in Hamburg. In voice-over, a male narrator exposits the foundations of their relationship: Rolf, who lives with his widowed mother, has aspired to be a doctor since childhood; Elizabeth, infatuated with his every activity, attends his anatomy lectures.

With a certain economy, such early scenes, editorially fragmented and pictorially documentarian (beautifully shot by Thomas Mauch), are informed by the voice-over: after Elizabeth tells Rolf the extent of her newfound fascination with anatomical dissections, we are told, “She hadn’t touched anything. She spoke a little too much about things she had only seen.” In the following scene, we hear a lecture hall of medical students responding enthusiastically to the speaker, as we watch images of Elizabeth, clearly bored – her own enthusiasm for the subject was short-lived.

Such an impulsiveness is at the core of Elizabeth’s character. The male narrator seems to side inevitably with Rolf, sharing his ultimate bemusement with regard to Elizabeth’s enigmatic, aloof charm. An early scene in which the newly-married couple host a house-warming points to Elizabeth’s potential insidiousness – or self-delusion – as a particularly female trait, as party guest Irina (Nina Frank) chats glowingly to off-screen men in one shot, then retreats to the corner with sudden gloom in another. 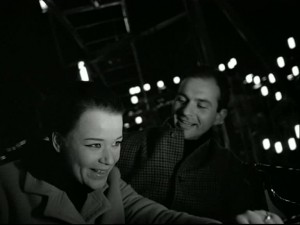 An unhappiness brims beneath the film’s surface of facial glances and bodily gestures, and such either-or fleetingness is magnified by the matter-of-fact way in which the narrator elaborates upon events. “One week later,” we are told at one point, “Rolf and Elizabeth are going on vacation on his moped. She returns pregnant.” In the consequent sequence, Reitz depicts this consummatory holiday as a brief fling with euphoria in itself, its imagery and sounds a kind of symbolic stroke of the elemental, with love scenes unfolding in tall grass and laughter-in-close-ups given a hand-held, improvisatory feel.

Love is the great what-if precluded by social difficulties, hence our lust for it. Just as that sequence is followed by one in which Elizabeth is introduced to Rolf’s mother, others precede scenes wherein the realities of society bring the mood back to earth. By the point at which we’re told that Elizabeth reconciles with Rolf after a brief separation, and that they have their fifth child, the pattern by which these people defer sadness by desperately hurling themselves into an illusionary state of progress is all-too-clear.

The couple enjoy the temporary thrills of a rollercoaster ride – surely their entire marriage’s metonym – before Rolf enters the stresses of providing for an expanding family with an interview at a pharmaceuticals firm, facing a top-down scepticism from the outset due to having discontinued his previous medical studies. The film’s causal pattern seems to be one of latent discovery for its characters – time and again, the impulsive entry into a commitment that will supposedly strengthen their bond only leads to further challenges. Indeed, the way in which the couple arrange their first home with a carefree approach convention seems to be Reitz’s heartfelt cry for regulation.

Such a call for a more regulated life seems strengthened by plot-strands dealing firstly with Rolf’s working life and secondly with American Mormons, to whom an emotionally fragile Elizabeth – and, by extension, Rolf – turn in need of a salvaging force in their lives. The implication here is clear: students’ emotional adventures will struggle to meet the demands of their professional ambitions, an irreconcilability that fosters both religious faith and a working life in which one’s labour is sold in return for one’s basic sustenance. Lust for Love shows these elements of contemporary life with brevity and sincerity.

Lust for Love is released on DVD on Monday, April 2. A clean enough transfer compensates for a lack of extras, and since some of the subtitles are grammatically incorrect, it’s difficult for this non-German speaker to say if the voice-over’s combination of tenses is intended or clumsily translated.