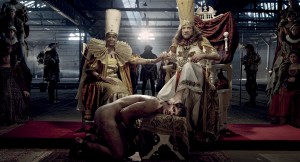 The narrative of Peter Greenaway’s Goltzius and the Pelican Company is almost secondary to the sheer theatrical visuals, the performance put on for an audience, blurring the boundaries between stage and screen and fully immersing themselves into the selection of scenes that they put on for both their own pleasure and that of the audience. Greenaway, known for his exploration of sexuality through eroticism and costume, returns to the 16th century where Goltzius (Ramsey Nasr), a painter is doing all he can to gain the support and patronage of the Margrave (F. Murray Abraham). Goltzius wants to be able to set up his own printing press where he can print illustrated erotic images of stories from the Old Testament. To pique the attention of the Margrave and the court around him, Goltzius and his company of men and women promise to perform a selection of these stories to show that they really understand the intricacies of the tales.

As time goes on, the Margrave becomes infatuated with members of the company and angered by others and thus becomes entangled in the performers lives. Whilst some end up behind bars, unable to perform and therefore leaving Goltzius in an awkward position, the Margrave is more than happy to partake in some of these performances if it means getting closer to the women in the company.

Subtly and beautifully Greenaway strips the company, the court and the Margrave both physically and metaphorically (whilst the audience is the latter, although

one never knows how an audience is most comfortable in their homes…), discovering the eroticism of the stories from Adam & Eve to the story of Salome. He is never worried about offence or misinterpretation, instead from the very start there is a clear sense of sexuality in the air. Soon the lines are crossed and it seems perfectly normal in this world (as it very well should) for men to be sleeping with men and women to be sleeping with women. Flirtation becomes an intense sensuality that only a director like Greenaway could pull so wonderfully from his cast.

The entirety of Goltzius and the Pelican Company feels like it is taking place on some soundstage (a la Dogville), yet the audience are taken into somewhere totally transformed and other worldly. There are pointers to the audience that this is a form of royal court, but soon it dissolves into a dreamlike world where jail cells are suspended and the Margrave partakes in a daily shitting for his court. The colours are bright, bold and not at all bashful – far from shying away, the film takes the audience in it’s grip, does something naughty to them and then releases them with the final orgasmic cry of the final scenes of the film. 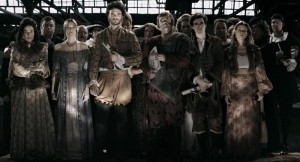 It also takes a very talented and unique cast to pull this together and the performances from the pan European set of performers, who never out do one another (unless of course the character calls for it to be so) bring this film together and hold it tight.