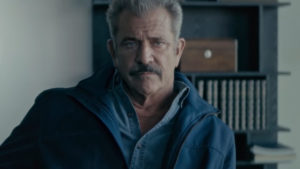 DRAGGED ACROSS CONCRETE is, as one reviewer said, a neo-exploitation potboiler. That’s the take away from all of this. The one liner. The packaged piece that encapsulates everything. In the beginning and all that. Though to take any of S. Craig Zahler films as a simple tagline is pointless. This is his third film and it feels more like a conversation piece about the state we are in and less like a genre melding odyssey, like his previous films have been. I imagine it will find a lot of hostility from certain, expected crowds.

However it seems that the majority have really understood that this is more than the sum of the marketed parts. It should be clearly seen as a discussion on classic masculinity and toxic identity in film. Albeit in a neo noir detective drama. With Mel Gibson. A moustache. And his Vince like side kick. 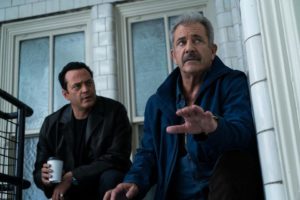 Brett Ridgeman (Mel Gibson) and Anthony Lurasetti (Vince Vaughn) are police detectives, fighting crime with a heavy hand. When one bust is captured on film and shared to the general public, both are suspended by their superior, Lt. Calvert. Although Ridgeman asks that Lurasetti be spared from any sort of reprisal, Calvert declines the offer. Stuck in a nightmare of debt, sick wife and teen abused by the neighbours, he comes up with a plan. Through Friedrich (Udo Keir), a wealthy businessman and criminal whose son was saved by Ridgeman. Friedrich gifts Ridgeman an opportunity of a lifetime. A name – Lorentz Vogelmann. He is up to something perhaps drug related. They could take the money, which Vogelmann is expected to take away from all of this. All they need to do is follow him. Find the people he meets and do the swipe. What happens if the expected, doesn’t happen? What happens if Vogelmann stops outside a bank? 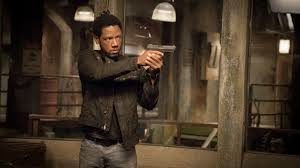 Coming from the director of BONE TOMAHAWK and BRAWL IN CELL BLOCK 99, I expect punch and splatter. I expect force and feeling. I expect clever use of character and convention. You get all of this through the 2 and a half hour film. S.Craig Zahler never pulls any of the expected punches. We knew he would never do that. He puts Mel Gibson (a career highlight) in a great central role. He used neo noir conventions (dark lighting, morally dubious law enforcement etc) and is blackly comic in places (jet black in the truth). The Zahler brilliance is his use (and abuse) of genre formulas. Like Tarantino did in the past, with levels of nuance and tender tones.