In village of Accendura a terrible secret has been buried for years. When Bruno, Michele, and Tonino stumble across a brothel and attack Giuseppe (Vito Passeri) the villages peeping tom, they are bent of mischief. Bruno however goes missing from his home and is later found dead, the whole town goes crazy. Andrea (Tomas Milian) a journalist from Rome, a police commissioner (Virginio Gazzolo) and local chief of police Captain Modesti (Ugo D’Alessio), all are on the trial of a killer.

Giallo, Milian and Fulci. Whats not to like about this dark delight. It has the usual tropes and tried conventions but it is so much more than the sum of all those seen before parts. It has width in everything. Fulci is at his genre best. He composes images, crafts get perfomances and even executes an exceptional murder sequence to music. Fulci makes the film coherent and artful. He even pulls back from the gore until the end and the film benefits from it.

Like many giallos, plays on the idea of the undiscovered or uncovered. We have the world that we see and now we have the ‘real’ world of sex, corruption, magic and murder. Dont Torture a Duckling is placed inside this and is bursting out of this. It is also setting out to challenge the accepted and the social order which simply placed these things in order. Fulci was an iconoclast and in this film he has the right tempo, tone and balance to pull off his rock throwing anger. 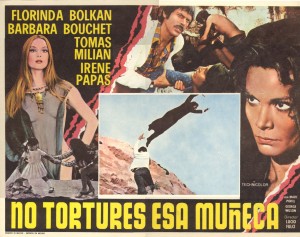 Shameless have giving us the film and a slection of trailers but never fear. The film is a must see and a must watch at least twice. With a world of comprehension and fears, dark motives and desires you need to stay sane.