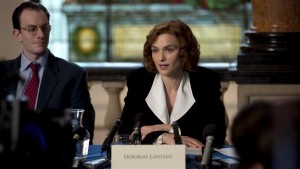 Based on a true story, Denial tells the tale of Deborah Lipstadt, an American Jewish historian and her four year long legal battle again David Irving, a well know Holocaust denier. Following the case, Lipstadt wrote the book, History on Trial: My Day in Court with a Holocaust Denier, which serves as the source text for this adaptation from Mick Jackson (The Bodyguard).

Denial is a compelling and spellbinding watch, both powerful and provocative and led by two outstanding performances from Rachel Weisz as Lipstadt and Timothy Spall as Irving. The film also features fantastic supporting work from Tom Wilkinson as Richard Rampton and Andrew Scott as Anthony Julius.

As far as biopics go, Denial hits all the important plot points by going from A to B to C, with little deviation or innovation but it does bring to light something that is rarely discussed in the open, that of Holocaust denial. But the real magic of the film is that whilst the subject matter is that of the Holocaust, the emotions could be applied to any kind of racism or prejudice.

The film itself looks great, in the same way that a BBC or HBO miniseries look fantastic. Whilst it isn’t widely cinematic, 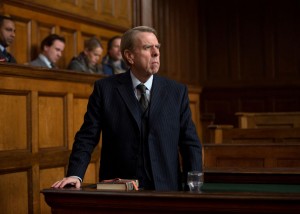 it is charming and well thought through. What is most interesting is that it covers a lot of ground in 110mins but with little lag and at a great pace – by the end of the film, one feels as if they have learnt about a historical event but also have grown emotionally involved in the story and with the characters.

The moments when the film goes above and beyond – the moments when they look back at history, talk about the victims of the Holocaust and even visit Auschwitz are at once tough and vital but also deeply moving and illuminating.

This is a solid, beautifully produced drama with actors at the top of their game.