As if we haven’t seen it enough times, Chronicle incorporates the infamous ‘shaky cam’ technique to try and add a personal touch to a warped superhero tale. The film incorporates elements of the standard superhero story but the characters never actually use their powers for good which makes it more of a ‘superpower’ than ‘superhero’ film. Chronicle follows three teenage characters; Andrew, Matt and Steve. After exploring a mysterious hole in the ground that emits a strange ringing sound they are each blessed with telekinetic abilities. At first they enjoy the novelty of their powers but soon they begin to see the consequences of having such abilities. 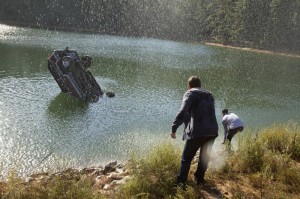 Chronicle is set in the standard film ‘school environment’ with all the usual stereotypes and a depiction of bullying towards the main character, Andrew. One of the main problems with Andrew being a main character is that it seems like we are being forced to sympathise with him but he is so pathetic at times he doesn’t seem to have any redeeming features that make him particularly likable. Some sympathy can be drawn, however, from the film’s focus on domestic violence and illness which affects Andrew and can be interpreted as the reason for his lack of social skills. His ineptness also provides a perfect opportunity to add the superpower elements to the film and show how these can change someone. The telekinetic abilities help the three characters to bond and, even though he is sometimes like a little gremlin clinging onto the ‘cool kids’, Andrew really makes a transformation.

One element in Chronicle that becomes increasingly annoying is the use of handheld cameras. Not because of the shakiness, which is often kept to a minimum, but because of the absurd excuses characters give for keeping a camera on. The film begins with the usual “I’ve got a camera and I’m filming everything” from the main character and eventually the plot gives the characters a reason to allow the camera to move freely but eventually it is taken into environments which even the best quality cameras would struggle to hold up in. There is also the usual question which comes to mind in shaky cam films – in times of stress, why are the characters still filming? It then becomes acceptable for the perspective to switch from one camera to another. But the most absurd of all is when a policeman in a hospital room states that “The camera needs to stay on for our investigation”. Chronicle is another film which suffers from the filmmakers’ choice to use handheld cameras throughout which adds nothing to the film apart from some level of realism which is eventually lost in the unrealistic plotline.

One thing about the film which is very good is the use of special effects. Chronicle is a low budget film which really makes use of special effects and uses them more wisely than many Hollywood blockbusters. These effects are really made use of in the penultimate scene of the film which is also the high point and most enjoyable part. At times it does seem that it is lacking something which may be due to the low budget and predictable storyline. After all, it is just the usual ‘With great power comes great responsibility’ which we have all seen many times before. Chronicle does exactly what it says on the tin but at times seems like it could have done a little more.