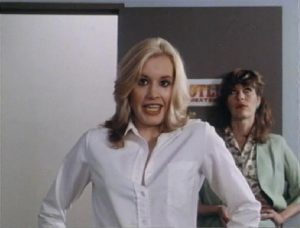 Rick Sloane is the sort of director film connoisseurs know. By connoisseurs I mean those who are cult film lovers. The sort of people that search for those oddities of cinema. Comedic without meaning to be, badly directed without any redeeming factors. They joyfully experience works by directors like Sloane and his canon of films. The two films here are his first and second adventures into the screen trade. BLOOD THEATRE and THE VISITANTS. Both have their own little quirks, their own little odd foibles. Both are intentional and unintentional comedic or awful in places. BLOOD THEATRE is an out and out camp fest of murder and cinema. A screen scream that often verges on the bizarre. THE VISITANTS is an oddity of aliens and ray guns. Kid on the run who has to escape the clutches of an awful pair of extraterrestrial types. 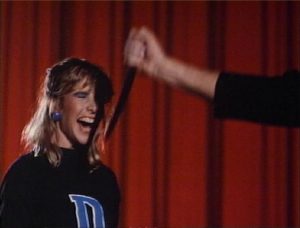 BLOOD THEATRE is the sort of teen slasher that the 80s was awash with. Set in a cinema that has closed after a murder spree, a new cinema company buys the site and wants to save money in refurbishing. They send in a group of staff from another cinema in the chain, to do the clearing up. This would be perfectly unacceptable normally but with a murderer knocking around…well we know whats going to happen.

The transfer – Lets say this. V S do their upmost to make it ten times better than that drab previous fare which has surfaced before. It deserves a round of applause. The tonal lighting and flat colours lift out of the screen.

The money is in the extras. Commentary track with Rick Sloane tops the bill. Sloane doesnt take his work too seriously and allows the audience to laugh. His anecdotes about the cinema set are too die for. The Hysteria Continues! commentary sometimes drifts into awful joke, counter joke and that makes it less fun. However I would still recommend it. If only for the fact that they name almost ever cast member. 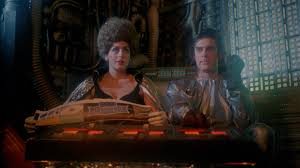 THE VISITANTS actually is a more fun film. Its more in the alien takes on the youth of the day film. Slapstick in the best way, the delight can be found in absurdity and in the often haphazard narrative. That and the frankly absent ideas.

The transfer – Well its very nice. The commentary by Rick Sloane has an exceptionally funny story that you must listen too.