A day in the death of Joe Egg Blu Ray review 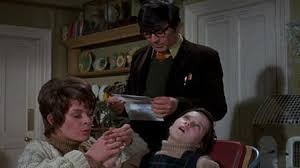 Taking as it’s cue the merge of French new wave and Avant guard theatre, A Day in the Death of Joe Egg takes both and fails to translate. With scattergun flashes of memory, paint brush flicks of exposition lead us down a path of comprehensible guilt, loss and truth. They also leave us feeling that the leads are little more than vehicles, to drive the narrative explosion of post modern reality. In a sense it is a day like any other, except for it’s misremembered by an Alzheimer sufferer. 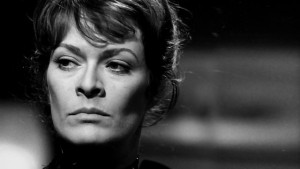 A marriage on the rocks. A couple unable to communicate with each other. A child, their only. Sufferer of Cerebral Palsy. A life in reflection. Give way to a decision to stay or go. The child might be the reason to try or it could be the straw that breaks the camel’s back. Sheila wants the daughter to live a normal life, Bro wants her in an institution that can care for her needs. Both want to do what is best for her, she can only be a choice of evils. Though this might also be what is best for each other’s conscience.

To be reflect on a film like A Day in the Death of Joe Egg, you have to understand it’s time of production and it’s position in cinema history. Made after Woman in Love, it shares that films ambition of making English cinema more political and more robust. It also comes off the back of a new wave, influenced by France, wanting to subvert cinema conventions. However the time it surfaced, much cinematically had changed. Cinema was more assertive in it’s vocal or figurative disenfranchisement. American exploitation had nailed it’s colours hard to the wall and British film lagged behind. This cosy middle class play lacks bite. Purely because it is more about form then about function. 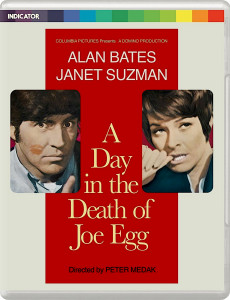 What I mean more directly is this. It obsessed over telling us an overly expositional narrative tale, without simply telling it. It keeps jumping into emotional, psychological and expositional themes with bold and jarring cuts. This lessens the power of the tale for me because it pulled me out. It was like having four stories being told by someone turn on and off film strips. I know many will adore this film but it left me cold and empty. A rare skill but one that I found with this telling.

Film lookks amazing on the big screen of say a 20″ TV. Indicator give us a delight of a disc in terms of features. Commentary is good but I was not so taken with it. The stage to screen doc is a delight.