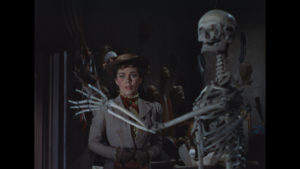 This slice of shlock and gore returns in a ramped up version for blu ray that explains why some films are more about nostalgia than quality. When sculptor and self confessed mad man Professor Henry Jarrod (Vincent Price) tries to find a backer to buy out his business partner Matthew Burke in their Wax Museum. He thinks he finds it but then Burke says he cant wait and has to act. A fire and insurance will cover him and let Jarrod work with this new backer. When Jarrod refuses, he goes ahead anyway. The Museum is destroyed but what happened to Jarrod? 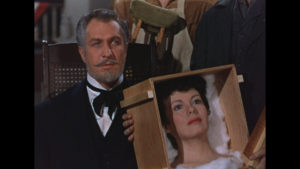 Can we accept a few things prior to me beginning this. One that the transfer is going to be often weak even in the Blu Ray. Two the 3D is often pointless and three Price is the king of horror for a multitude of reasons. So what about House of Wax as a film? Well its 90 minutes of genre fun and games. Taking a classic unpublished story, flexing that technology with 3 Dee and sprinkling some bitter revenge, its sufficient for most viewers. For some of those in the hipster fold, the audience will sneer and Jeer for the film is copy + paste script but they (and if you) miss the point. 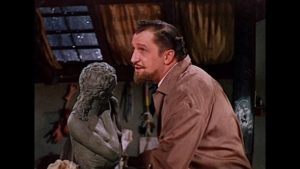 It is more than the sum of its pieces. Its about physical ownership of a body. Its about sensationalism, spectacle and classic old school curiosity. Prices Jarrod is a man about art who becomes obsessed with gore and how.

So audiences can be fickle and also can be rather obsessive over films like this. So the Blu ray is the first outing for the film. As said its not clean and that’s how 3D ages from the 50s. A commentary helps a film to open up and come alive. The commentary here is excellent and adds strokes of information and comment that help the film feel more than it is. For me in all this I found the real gem here to be the first film. Mystery of the Wax Museum is such a thrilling incarnation. Its clever and swaps an assassin for Voltaire. Outside of that it is plotted better, directed with a vigour (Curtiz is a great director). The choice is clear buy…for the old film first and then the next. 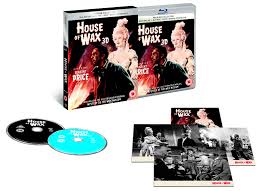