Howard Hawks film noir masterwork sees a welcomed return to the small screen in two versions and to be honest both look better than ever. Based on the Hammett novel this is the complex and confusing delight. When Philip Marlowe (Humphrey Bogart) takes on a blackmail case, it leads to a dark trial. From the lives of the super rich and spoiled and the gambling debts of a General Sternwood. He has lost out on something else however. When Marlowe meets General Sternwood’s older daughter, Mrs. Vivian Rutledge (Lauren Bacall), the jigsaw puzzle seems to be falling into place. As Marlowe goes to Geiger’s rare book shop he meets Agnes Louzier. Following her to her house, he hears a gunshot shatter the night calm. Breaking in he finds a dead body and the story is about to become complicated. 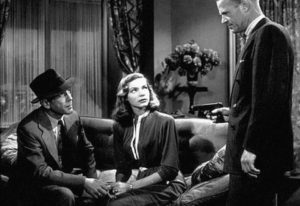 Ok, if you know film and have studied it at any capacity you would have either heard of or seen this film. Its a film once again with a great legacy and legend. The films director Hawks was a wonderful film maker who covered a variety of genres with skill and ease. 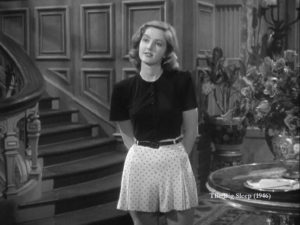 Complex and occasionally convoluted in plotting, it is a joy for film noir, Bogart and Bacall or classic cinema fans. Take for example its wonderful use of dialogue which is both funny, satirical and often sardonic but always played dead pan. This is always joyful to listen to. Then you have the astonishing black and white hues. The deep rich blacks (that the Blu Ray really brings to the fore.) For a fan of the visual image and cinema of the Black and White cinematography vein, the joys of deep focus, shadow, light and shade is excellent. Then you again have those performances that zing with chemistry and charisma. Above all for me is that plotting. In the 1945 version you get to see the more standard version. A version that would work for everyone but would also leave you without seeing those lovely undertones of menace and sexuality.

To the disc. Yep the visuals are utter lovely visually. The others extras have been seen before and I was less interested in them. However it is well worth paying for! 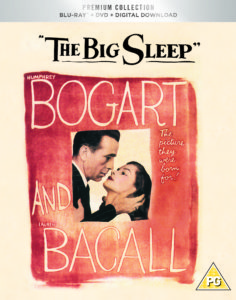 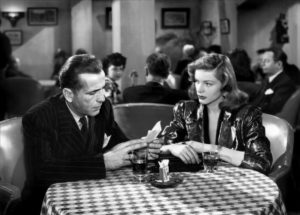