The Naked Lunch, The Soft Machine, Dead Fingers Talk, Nova Express, The Ticket That Exploded, Cities of the Red Night. This is the world of William S. Burroughs, exposing us to the horrible truths we tried to forget. Unlike many writers, this is a man worth making a film about. NYU graduate Howard Brookner spent years hanging out with Burroughs and created this intimate portrait worthy of a singular individual, now restored and reissued on this Criterion Collection release. 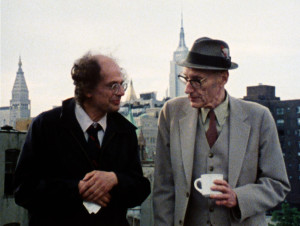 Gaunt and upright in suit and hat with that distinct drawl, Burroughs could have played the demented Dr. Benway in a Bayou set voodoo B-picture. Here he is centre stage, clearly enjoying his status as revered seer of the left-field. This well-bred gent now gives readings at punk gigs where the audience are keen to worship at the altar of a counter culture hero.

Burroughs was both father figure and benefactor of the Beat generation. Allen Ginsberg, who championed Burroughs’ debut The Naked Lunch, is clearly still in awe. This extends to his strangely casual attitude to the horrifying moment Burroughs shot his wife Joan Vollmer. It was a drunken William Tell game gone wrong. Burroughs squirmed out of the consequences but the event gave him the ‘Ugly Spirit’ that sparked his experiments in literature. It also shone a light on the distinctly men-only world of the beats and gives an unsettling undertow to the otherwise comic scenes here of Burroughs showing off his various guns.

We get to feel part of the authors inner circle, allowed to witness an unguarded Burroughs as he gets drunk in his basement bunker with Terry Southern (writer of Dr. Strangelove). Back in the light of day there is the strange power play between Burroughs creepy assistant James and William Burroughs Jr, a damaged man looking to his dad’s legacy for guidance. When the conversation turns more personal Brookner gets behind the bravado, and Burroughs responds, lips twitching. Suddenly he is just an old man upon who drugs, emotion and age have taken their toll.

Standing in his childhood St Louis bedroom, Burroughs recalls: “I was afraid of the darkness and the lightning”

‘Burroughs’ is now available on DVD and Blu-ray from the Criterion Collection.