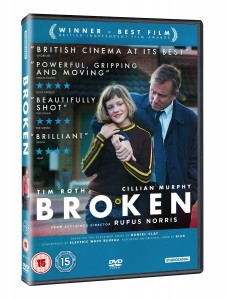 From acclaimed director Rufus Norris, comes the British Independent Film Awards 2012 Best Film Winner BROKEN; a powerful, captivating and heartbreaking exploration of love in all its many forms; idealised, unrequited, and, ultimately, unconditional. With some light comic touches and a brilliant central performance from newcomer Eloise Laurence, this coming of age story deals with the tumultuousness of growing up in a world where the unhappy certainties of childhood give way to a fear-filled doubt, and where a complex, broken world fills the future. Featuring a stellar support cast including 2013 BIFA Best Supporting Actor winner Rory Kinnear, Tim Roth and Cillian Murphy.

Based on Daniel Clay’s acclaimed 2009 novel Broken is a story that gets to the very heart of modern social dysfunction.

Broken is based on the novel by which author?

Check out this special clip: