Win Ealing Studios Out Of The Clouds on DVD
Home
Competitions

Win Ealing Studios Out Of The Clouds on DVD 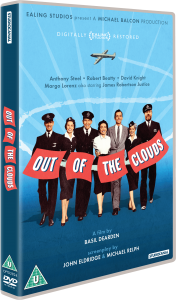 From Basil Dearden who directed classic British films such as Dead Of The Night and Khartoum, Out Of The Clouds is a bedazzling ensemble piece that encapsulates the early days of touristic aviation in the 1950s.  Starring Anthony Steel (The Wooden Horse), Robert Beatty (who played Irish detective Philip Odell for the BBC series) and James Robertson Justice (Moby Dick), the story is loosely based on the John Fores’ novel The Springboard and the script is the work of Dearden’s long time associate, Michael Relph (Victim, Pool Of London, The Assassination Bureau).  Set in Heathrow Airport, the film used one of Ealing Studios’ largest ever sets to create the replica of a terminal building.

Out of The Clouds follows the complicated lives of several passengers and members of an airline crew during a typical bustling day at Heathrow airport. A pilot dealing with his gambling addiction, a chief duty officer dreaming of becoming a pilot, a love struck American engineer and an extremely popular air hostess make the unforgettable characters within the rich tapestry of tales in this entertaining and compulsive viewing.

Digitally restored to return it to its pristine original picture quality, OUT OF THE CLOUDS will be released on home entertainment formats sixty years after its original release, and is a must-have for all Ealing film fans.

The Digital Film restoration was funded by STUDIOCANAL in collaboration with the BFI’s Unlocking Film Heritage programme (awarding funds from the National Lottery).

Out Of The Clouds was selected for funding from the Unlocking Film Heritage for inclusion in the BFI’s Britain on Film project. Everyone has an engagement with the places that help to tell their own story: where they were born; where they went to school; where they worked; where their parents and grandparents lived; where they went on holiday; where they live now. Britain on Film enables people throughout the UK to find films that enable them to explore the places that relate to their own personal histories. Films selected for the project therefore all contain a strong sense of place. These films are about defining the landscape of the UK. Out Of The Clouds was set and largely shot in and around London, at the Ealing Studios and at London Heathrow Airport.

Out Of The Clouds is released on DVD from 13th July from Studiocanal.

We have 3 x  DVDs of Out of the Clouds to giveaway!

a) Victim
b) Brief Encounter
c) The Red Shoes